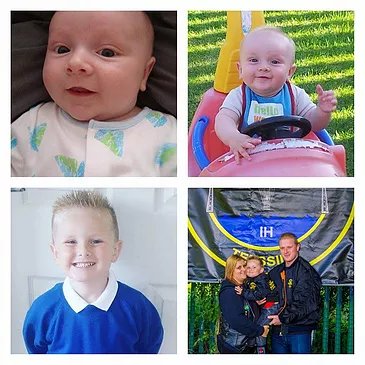 Leo crawford born 8th march 2012 6.52am at 41+5 weeks weighing a whopping 8lb 6oz. My labour seemed to be going fine i was relaxed in the birthing pool falling in and out of sleep during contractions, when i started pushing the midwife kept telling me just one more push his head is out. I couldnt push no more he was stuck! Leo was born in poor condition following shoulder dystocia, he had no heart rate, was white, floppy and not breathing. Me and his dad thought the worse. The room filled with doctors and nurses they started CPR his heart slowly started to improve and he took his first gasp at 6 minutes old. Not breathing effectively at 9 mins of age he was transferred to NNU. We didnt know what was going on we had no idea how our baby boy was doing, We just had to sit and wait. At 10.30 we got the chance to go and see our little boy! Was the scariest and happiest time of our lives, leo had to be in a incubator he had wires and tubes everywhere! He needed a ventilator to help him breath he was having seizures so the doctors conmenced therapeutic cooling from 6 hours of age which meant they had to shut down all his body/organs because they expected brain damage. The therapeutic cooling meant he was in a state of hypothermia and his brain had to do alot of work to stop brain damage. They continued this process for 72 hours, with leo in this state it meant he couldnt move or anything he just looked like he was dead. Was very hard but we knew the doctors and midwives knew what they were doing. No further seizures were noted and they started to warm him again although he remained hypertonic for a further 5 days everything seemed to be getting better! 5 days old he was finally on the mend they moved him from intensive care up to special care. We finally got to hold our perfect baby boy! The doctors were over the moon with his progress and we were over the moon with what they had done, it was a difficult and a rear procedure they performed on leo. At 6 days old he was now in a cot and by my bedside we couldn’t be any happier. On day 8 he was off all medications and we would finally be able to go home. After months of returning to the hospital for checkups he finally got discharged. Leo is now 3 years old and not one bit of possible brain damage insight!